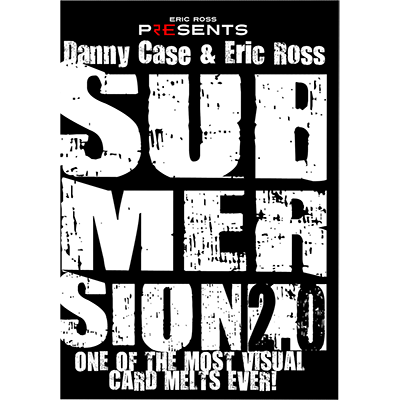 Two cards are freely selected. Each card is placed into opposite ends of the deck (one card near the top of the deck and one near the bottom). Both cards are sticking half way out of the deck for everyone to see.

Suddenly, the cards are seen to slowly come together, passing right through all of the cards in between them. This is one of the most VISUAL card melt effects EVER released. Oh, and did we mention, it's totally impromptu?

That's right, imagine you're at a party and someone asks to perform a card effect with "their" deck... Submersion 2.0 will blow them away!!!

The download also contains a few different handlings that Eric Ross has performed over the last 3 years.

BONUS!
Included on this download is Eric's "Finder" Effect.

One card is selected and lost in the deck. 2 Jokers are placed at separate parts of the deck. They VISUALLY melt together (through the stack of cards) to find the previously selected card.
Acheter maintenant
©2021 Club de Magie de Montréal, Québec • Plateau-Mont-Royal, Québec