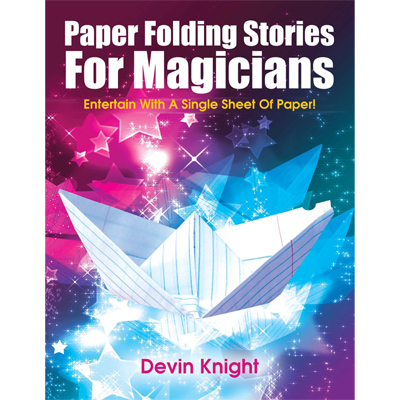 "Even though I'm a mentalist, I am a sucker for origami and puzzle effects. Devin has compiled a great collection of storytelling magic, using nothing more than a sheet of paper! My favorite, St. Peter's Gate, is worth many times the price of this eBook! It is completely impossible looking, yet so easy to execute. Amen to that!"
- Robert Marsi

MY CHILDHOOD MISADVENTURES: A complete storytelling routine for kids that uses only one unprepared sheet of newspaper. Nothing to prepare, just pick up any sheet of newspaper and start telling the kids a funny story. As the story is told, the newspaper is folded to illustrate what you are saying. You tell them about how you got caught in a rainstorm and tried to put out a fire at a nearby house. Finally, you were caught in a flood and would have drowned, except you were wearing a life jacket, which is the final item you make from the newspaper. This story is a proven winner, as children love stories. This story is not only outrageous, but also funny. Jay Marshall used a similar story in his act.

ST. PETER'S GATE: This is Devin's favorite paper-folding effect. This has been used by gospel magicians, but Devin shows you a way to use this in secular shows as a novel paper-tearing effect. In Devin's opinion, this is one of the most amazing paper folding stories ever created. It never fails to stun anyone who has not seen it before!

The performer shows a single sheet of paper and gives it a few folds. He quickly tears the paper into three pieces while reciting a clever rhyme. All the pieces are opened except one. Those pieces form the word Hell perfectly and there are NO PIECES left over, except one. When this piece is opened, it is seen to be a cross! To any layperson, this paper tear seems impossible.

In the 40s, a very clever rhyme was written for this effect that makes it suitable for secular shows. This way, it does not appear to be a sermon. This rhyme is almost forgotten nowadays. Devin put the rhyme into a Google search and it did not turn up. In this ebook, Devin gives you the entire rhyme, which is worth the price of the book for those who do this effect. This novel effect will be remembered long after your clever card tricks are forgotten.

POOR MAN'S TROUBLEWIT: Perhaps the most famous paper-folding effect in magic is Troublewit. It has been around since the mid 1600s. Although, technically, not magic, the effect has been a staple in many magic acts for hundreds of years. In this book, Devin gives you an impromptu version, using nothing but a single piece of ruled paper.

While spinning a charming tale about a little boy in search of a boat, you make 14 or more objects. One fold leads to the next, then a new object appears, finally ending with a Chinese Junk boat. Detailed systematic photos teach you how to make all the objects. Although it takes a little practice at first, once you learn it, you will have it for life.

In addition, Devin gives you many tips, jokes and ideas he has developed over a lifetime of performing this. Considered by many origami aficionados to be the best paper-folding story ever created.

ORIGAMI BEACH BALL: A stunning paper fold that amazes anyone who has not seen it before. Devin uses it to close his Poor Man's Troublewit routine, but you can use it as a stand alone paper-folding bit at any time. You take a small square of paper and start to fold it. You tell the kids, that you are making your favorite childhood toy. Can they guess what it is? You continue to fold, but the kids have no idea what you are folding. It does not look like any toy they have seen. After about a minute, you are done folding and proudly proclaim you have made a beach ball.

The kids protest and say that it is not a beach ball. It looks like a flat folded piece of paper. You calmly remind them that when you buy a beach ball, that it comes flat and you have to blow it up. Placing the paper to your lips, you blow into it. To the amazement of the kids, the folded paper actually inflates into an actual paper beach ball that the kids can toss and play with. Just like a real beach ball!

A great sucker effect for kid shows, as the kids do not expect you to blow up the beach ball. It never fails to draw looks of amazement from the kids.