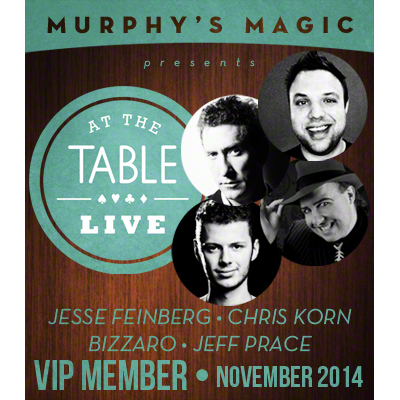 SKU: 53869
CA$19.95
CA$19.95
Non disponible
par article
November is the month of giving, which is why we here AT THE TABLE are giving YOU an AMAZING opportunity to enjoy the AT THE TABLE, Live Lecture Series! Become a VIP Member for ONLY $19.95! Less than $5 a lecture for 4 amazing, unique, fresh, and fun lectures from the minds of Jesse Feinberg, Chris Korn, Bizzaro and Jeff Prace!

Jesse Feinberg is a creative soul who has consulted for some of the top names in magic including the one and only Criss Angel. Jesse has numerous published effects including highly acclaimed releases from Paul Harris, so you know his lecture will be full of fun, outstanding, and unique magic. Chris Korn is a true working pro. Having had numerous TV specials including one on A&E, Chris is considered to be one of the most entertaining sleight-of-hand magicians living today. The advice alone that Chris will share is worth the price of admission to his lecture. Bizzaro is just that. Bizarre. His creations are absolutely genius and he plans on teaching never before published effects for the first time ever, along with lessons in creativity, prop making and even electronics tinkering. Finally, Jeff Prace, a 20 year old prodigy who has published effects in almost every major magic periodical that is out there has a lecture planned that will have you using more than just a deck of cards. How about straws and iPhone headphones.

Take advantage of the VIP Membership and get all 4 lectures for only $49.95!

Spell-O-Change - Make random scribbles on the cellophane of a deck of cards VISUALLY form into a written prediction. This one is EXTREMELY visual.

Coin Thru Box - Cause a BORROWED and SIGNED coin melt right through a regular card box.

Bits and Pieces - This is a section Jesse calls his "Inspiration round". This will be a discussion, demonstration of The Floating Card, The POP Card Change, The Ambitious Card and a NEW Mercury Card Fold.

PLUS! - Jesse will perform and explain some of his hit effects including Wedge, YaYa and Animate & Restore.

Chris Korn is a name that the magic community has known for quite some time. He is very well respected and has dropped the jaws of some of Hollywood's biggest names including Brad Pitt, JJ Abrams, Alec Baldwin and Ari Gold himself, Jermey Piven.

What makes Chris a pro? He has performed for audiences in over 20 different countries around the world, and over 100 cities across the US of A. He also had his own TV special on A&E titled, Mondo Magic, where he entertained over 74 million viewers worldwide.

From playing cards, to coins, to whatever Chris touches...he plans on bringing a lecture that appeals to magicians of any skill level. No matter if you are brand new to magic or a seasoned pro, there will literally be something to take away from this lecture.

Chris Korn's AT THE TABLE Live Lecture will be a different experience, as he will touch on effects that he has never lectured about, as well as cover effects that you may have already seen, but with extra handling ideas and tips from one of the most talented sleight-of-hand magicians in the world.

Chris is truly one of the most influential and creative powers within the magic community. So if you are looking to learn from a polished, experienced and true working pro, then tune in to Chris Korn's AT THE TABLE LIVE LECTURE.

In a world full of reality TV and lackluster entertainment, Bizzaro: The Optical Illusionist, strives to prove that "normal" is just the setting on a dryer.

Bizzaro has performed from coast to coast and appeared on FOX, NBC, America's got Talent, and the Travel Channel's Extreme Conventions. He has even been seen at the famed Magic Castle in Hollywood, CA. He has fabricated magic for other entertainers like Gallagher and the one and only, David Copperfield.

This will be a lecture like you have never seen before, as Bizzaro takes you into his laboratory of magic and mystery. You will learn, STEP BY STEP, how to make, construct and perform magic from Bizzaro's twisted yet VERY creative mind.

This will be a lecture on Prop making and creativity. He will also talk about simple, basic electronics that you can do at home, to turn your performance into something amazing!

Every effect that Bizzaro performs and teaches in this lecture will be BRAND NEW, material that has NEVER BEEN PUBLIHSHED! What effects they are remain a mystery. Almost as much of a mystery as Bizzaro himself!

PR-Aces - An Ace production at equilibrium between flashy and smooth.

Where Time Stands Still - Three cards are revealed in a surprising, off-the-cuff manner

The Contest - An unanticipated demonstration in cutting to the high card

Jeff will also share with you his ideas to help you become a more precise and creative thinker!

All of this for only $49.95! Enjoy them live, or download them and watch them at any time! Become a VIP Member TODAY!
Acheter maintenant
©2021 Club de Magie de Montréal, Québec • Plateau-Mont-Royal, Québec