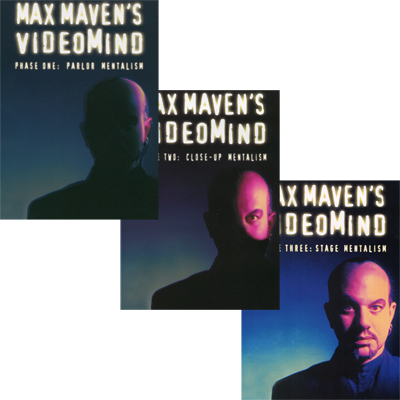 It's done under what can be the most difficult conditions: performing for a medium - sized audience with no formal stage setting to focus attention. Sightlines are often poor, and people must be drawn into the experience even if they can't see everything clearly. Too, you may be working surrounded, so you'd better be sure there are no angle problems. And, as it's likely to be a social occasion filled with potential distractions, your material needs to be compelling from the very first moment: intriguing presentations that build to powerful conclusions. This video features a range of commercial Parlor Mentalism. No pre-show work, no secret assistance; this is practical material for the solo performer, using subtle and unusual methods that are as fascinating as the effects they produce. You'll learn: Volume Two - Close-Up Mentalism

Perhaps the most intimate form of entertainment that can be presented in public. It requires a delicate interplay in order to achieve a balance between the charming and the disquieting. This is material designed for very small groups, or even working one - on - one. This video features a range of commercial Close - Up Mentalism. No pre - show work, no secret assistance; this is practical material for the solo performer, using subtle and unusual methods that are as fascinating as the effects they produce. You'll learn: Volume Three - Stage Mentalism

Formal performance conditions: a stage, a schedule, and the obligation to entertain an audience of paying customers. What you need for this type of situation is material that will allow you to connect with a large group; routines that are efficiently structured for maximum impact so that they'll generate interest, maintain a robust energy level, and hold the spectators' attention from start to finish. Goal Mine (Previously Unrevealed) - This is an ideal opener: a routine of mental persuasion that serves to establish the performer's credentials, gets several audience members involved, has a climax that virtually guarantees laughter and applause - and all of the props can fit in your breast pocket.
Acheter maintenant
©2021 Club de Magie de Montréal, Québec • Plateau-Mont-Royal, Québec