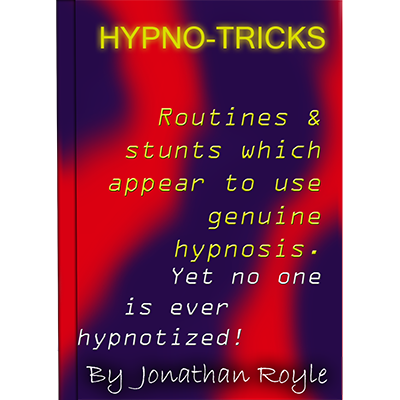 The term "Hypno-Tricks" is often used to describe so called fake or pseudo hypnotic style stunts and routines, which look exactly like a display of genuine Hypnotism.

These little known techniques can be used anytime, anyplace, anywhere and used correctly are guaranteed to work on anybody & everybody including the world's biggest skeptics!

What's more those who take part in these amazing displays of apparently genuine Hypnosis will actually believe they have been in some kind of real Hypnotic trance as will the watching audience.

The real beauty of these Hypno-Tricks techniques is that once you have discovered their secrets and mastered the art of performing them effectively they may be presented in many different ways as follows: They may be presented equally as well in a comical manner as they can be in a serious or scientific style routine, and as such this complete course in "Hypno-Tricks" is 100% unreservedly recommended to all serious students of Magic, Mentalism, Hypnosis, NLP and related subjects!

WHAT WILL YOU LEARN?

This complete step by step training course in "Hypno-Tricks" comprises Secrets and Information which are worth many, many times their weight in gold to any professional working performer.

In fact you'll find more than enough secrets, ploys and techniques within this course to enable you to perform a complete act or show and as such we feel that this course represents remarkable value for money when you consider:

It's important to remember that none of these routines involve any genuine Hypnosis and as such can legally be performed where Hypnosis is banned!

Furthermore as no genuine Hypnosis is used and nobody is ever in any form of Trance, you should be covered by your Magicians Public Liability Insurance to perform most if not all of these routines?

And don't forget that there are numerous other secrets, ploys, techniques and routines explained in this course, many of which have never appeared in any other course, book or video by anyone else ever before!

THESE AMAZING SECRETS ARE PURE DYNAMITE