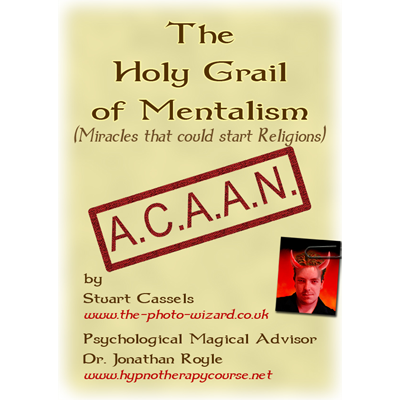 SKU: 53692
CA$20.00
CA$20.00
Non disponible
par article
Within the pages of this 55 page information packed PDF E-Book you will learn one of the cleanest & most impressive looking (to an audience) versions of the legendary "Berglas Effect" that has ever been released to the Magic World.

Here's what Marc Paul (Voted The Worlds Greatest Mind Reader) and a personal expert on the ACAAN plot had to say after reading this PDF...

"Thanks for "The Holy Grail of Mentalism". There is some seriously good thinking here, I particularly like the section on how to create "real miracles". I have always believed that truly inexplicable mentalism is only achieved by going that extra mile; you obviously believe the same"

There are several versions and methods for achieving a near perfect ACAAN effect (in the minds of a lay audience and in some cases even in the eyes of Magicians) explained within the pages of this manuscript and its true to say (based on dictionary definition) that absolutely no Stooges or Shills are used in any of them, indeed all who participate in the effects, will due to their clever construction be equally amazed and impressed as the watching audience.

Amongst the methods, techniques & Bonus Reputation making effects explained in clear step by step detail in this PDF are: All in all this is an amazing value for money package!.

"This is a decent quality release. I love the effect, I am happy with the method and pleasantly surprised at the level of detail in the PDF. The effect on the audience is that they have experienced the perfect Berglas Effect. As the author points out to achieve that there must be a compromise, there is no Holy Grail. The benefits of the compromise used far outweigh the drawbacks. The effect is written up clearly with good explanation and justification for the simple moves that make it work. It is in my mind best used as a stage effect with three people who do not know each other but could be used in other environments. All in all this is a nice piece of work. Well referenced and definitely worth the money"
- Anthony Jacquin

"In truth Stuarts PDF is a little like Marmite, your either going to love it or hate it! But Personally I've been performing Stuart Cassel's various version's (all of which are in his PDF) of ACAAN for quite some time now and I can honestly say that these effects and the bonus material he includes such as his apparently impromptu Signed Card Through Window and Signed Card in Beer Bottle using an audience members own deck of cards are absolute mind blowers and true reputation makers! I'd say that if your serious about your Magic and Mentalism then you owe it to yourself to order a copy of this PDF today."
- Jonathan Royle