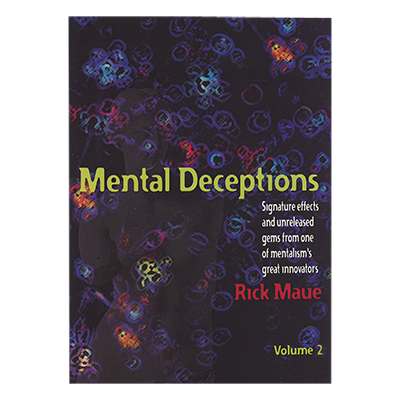 SKU: 51569
CA$34.95
CA$34.95
Non disponible
par article
Despite over four decades of magic and mentalism experience, Rick Maue has always managed to remain a bit elusive...until now! On this download, Rick presents a number of his signature pieces, as well as several unreleased items, with many of the effects coming from his working repertoire.

Mental Deceptions is loaded with strong mentalism for stand-up or close-up performances and remarkably, none of the effects require expensive gimmicks or props - just everyday items such as envelopes, poker chips, paper, playing cards, etc. (It's why Michael Weber dubbed Rick "OfficeMax Maven.")

What's more, no sleight of hand is required. Rick calls it VdM Magic - material that's so technically easy that the Venus De Milo could perform it! In other words, everything is well within the technical reach of every performer.

You'll also be able to step inside the mind of Rick Maue during informative interview segments conducted by magician Francis Menotti. You'll see for yourself why Marc DeSouza once asked Rick, "Why is it that when I see you lecture, I feel like I am watching a mad scientist at work?"

Volume 2 Features:
Beyond the Witching Hour- A bit of spirit communication that also teaches a very useful utility move for the everyday worker who wants to move the hands of a watch.
The final picture- Whether on stage, doing close-up, performing a seance, or working impromptu, this is the piece that Rick has performed more than all of his other creations combined.
Animal Instincts- A close-up prediction effect that relies on human instincts.
In the neighborhood- A simplistic version of "Out of this world"... but it doesn't use playing cards!
Abstract Extraction (Francis Menotti)- A strange effect that make brainwaves visible to the human eye.
Defining the difference- A strong bit of mentalism that demonstrates the difference between a magician and a mentalist.
Focus/ Sixth sense symbols- A three phase routine that looks and feels like a real mind reading. It appears impossible, because it almost is... unless you know the secret.
The journey- A stand up piece that has fooled some of the best minds in mentalism. It's strong and versatile, and like almost all of Rick's creations, everything that you need comes from a regular office supply store.
Interviews (with Francis Menotti).
Acheter maintenant
©2021 Club de Magie de Montréal, Québec • Plateau-Mont-Royal, Québec