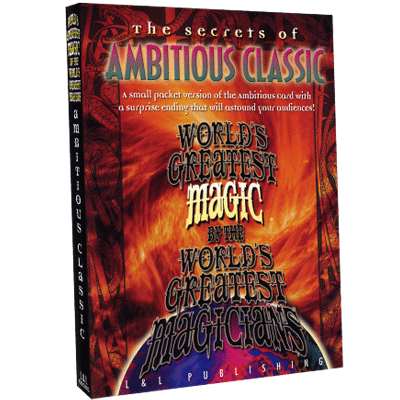 SKU: 46529
CA$14.95
CA$14.95
Non disponible
par article
A small packet Ambitious Card routine circulated in the underground among the cardmen cognoscenti before it finally saw print and was dubbed the Ambitious Classic. The plot is simple enough: several cards, usually and Ace through Five, each rise to the top of the small packet one at a time until there's only one card left, which is usually discovered to have magically changed into a completely different card, much to the delight of spectators.

On this video, you'll find five master card magicians each with their own interpretation of this modern classic of card magic Fittingly, Larry Jennings leads off with his routine which has served as the jumping-off point for many variations that have followed. James Swain is next with his interpretation of the Jennings routine but adding an eye-popping climax. Derek Dingle turns the routine into a humorous experiment in spectator perception while Michael Ammar boils the routine down to its most basic components, complete with a Super Practice Session to make all of the moves that much easier to learn. Finally, Bruce Cervon adds his four-card version where it seems all of the magic is happening under the most fair of circumstances.

Larry Jennings felt that the Ambitious Classic was one of the most entertaining routines that he performed for laymen. It was his "go-to" routine when someone asked him to do a card trick. Learn any of the versions of this marvelous card trick presented here and you'll always have an any-deck miracle at the ready. Running Time Approximately: 53mins
Acheter maintenant
©2021 Club de Magie de Montréal, Québec • Plateau-Mont-Royal, Québec